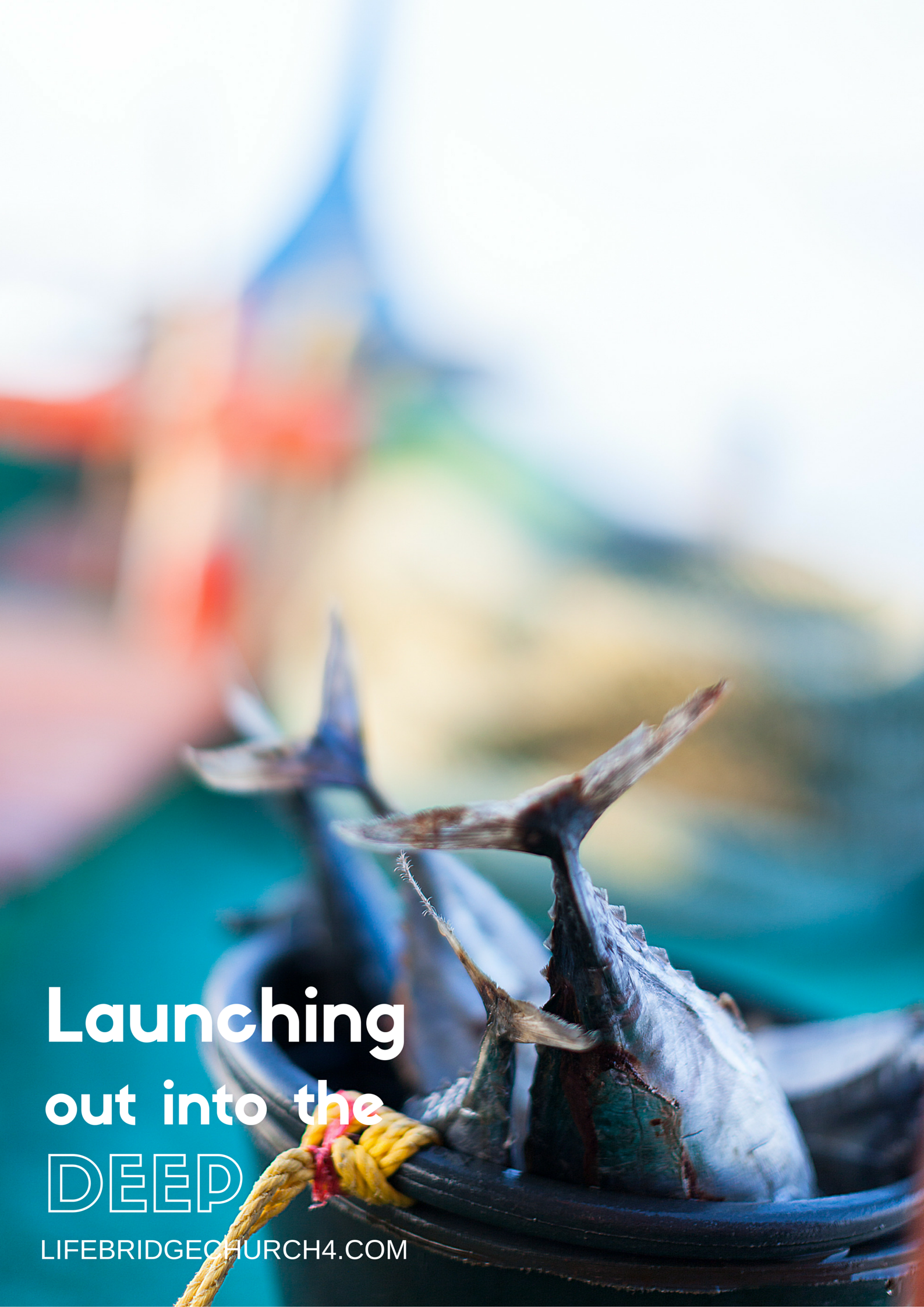 Launching Out Into the Deep

Sometimes, God calls us to get in over our heads… Launching out into the deep requires you go deeper in your faith, hope, and trust in God.*

When Jesus had finished speaking, he said to Simon, “Now go out where it is deeper, and let down your nets to catch some fish.”

“Master,” Simon replied, “we worked hard all last night and didn’t catch a thing. But if you say so, I’ll let the nets down again.”  And this time their nets were so full of fish they began to tear!  A shout for help brought their partners in the other boat, and soon both boats were filled with fish and on the verge of sinking.

When Simon Peter realized what had happened, he fell to his knees before Jesus and said, “Oh, Lord, please leave me—I’m such a sinful man.”  For he was awestruck by the number of fish they had caught, as were the others with him. Luke 5:4-9 NLT

Jesus called Peter to be his disciple on a rough day.  Peter and his companions had been out all night fishing and they caught nothing.  Tired, hungry, surrounded by a multitude of people, Peter tried to stretch out and clean his net so that they could go out fishing again that night. He had a lot of people depending on him as a business owner; he couldn’t afford another day without catching fish. The multitude was pressing Jesus and power was going out of Him so that everyone around was being healed (Luke 5:1-11).  Before Peter knew it, Jesus had stepped on his boat and charged him to put out a little from the land so that He could sit down and teach the crowd.  Peter didn’t mind. In fact, listening to Jesus teach made the tedious work of washing nets go faster.  He had heard about Jesus and he was curious to know if the message and the messenger was real.

After Jesus stopped speaking, he asked Peter to launch out to the deep and let down their nets for a catch.  This was completely ridiculous.  Peter, as a fisherman knew that the right time to fish was at night. He also knew that you caught more fish in shallow water.  Peter wanted to correct this rabbi, but he had spoken with such authority that he simply said “Master, we have toiled all night and caught nothing; nevertheless at Your word I will let down the net” (Luke 5:5).  It was at this point that Peter knew he was not dealing with any ordinary rabbi.  Not only did they catch fish during the day in deep waters, they caught so many fish that their net was breaking and they had to get their partners to come and help them. Both boats almost sank.  Simon Peter was so overwhelmed by the supernaturally abundant catch of fish, that he fell at Jesus’ knees and said, “Master, leave. I’m a sinner and can’t handle this holiness. Leave me to myself.”(Luke 5:8 Message)

But Jesus looked deeper into Peter.  Others saw a rough, impetuous fisherman to spoke more than he thought.  They laughed and called him “Simon” which means “shifting sand” But Jesus called him “Peter” which means rock.  He saw the potential in Peter to be a great leader who would “catch” men.

There is great potential in you! #LaunchDeeper

Launching Out into the Deep Waters

Jesus is constantly calling us to launch out into deeper waters. He is calling you to go deeper in Him… to trust and rely on Him more. He wants to increase your impact on other people. He is going to multiply your efforts. Even if you have toiled all night, you can through your net on the other side of the boat and have a “supernatural-catch.”

You have a super-natural catch ahead! #LaunchDeeper

Be Encouraged Every Day!

To find out more about Sue Detweiler, her books and radio ministry click here 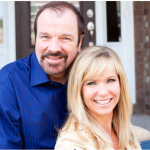 Wayne and Sue Detweiler relocated to Frisco Texas (a growing community north of Dallas) to plant and pastor Life Bridge Church which meets every Sunday morning at 8:30 am at The Roots 6142 Frisco Square, Frisco, TX, 75035. They are building a life-giving community and welcome innovative leaders to get involved in reaching neighbors, nations, and generations with the good news of Jesus Christ’s love and power. 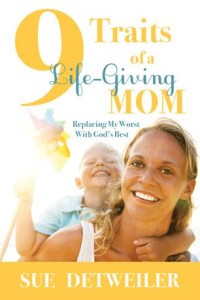 Sue has had a calling to write books for many years. When she prayed about which book to write first she was
surprised when she sensed God leading her to write 9 Traits of a Life-Giving Mom.  Every mom wants to be the best mom in the world to her children but often she feels like the worst. This is how Sue has felt as they have raised 6 children. In the middle of having her two daughters get married 7 weeks apart, 9 Traits of a Life-Giving Mom hit number 1 on Amazon’s Hot New Releases and gained popular momentum with moms groups and online communities. 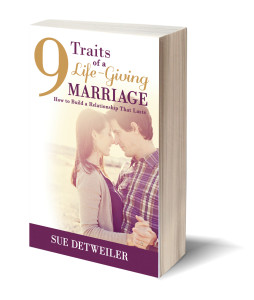 With over 25 years of marriage and ministry, Wayne and Sue have a heart help couples to build marriages that last.  Sue’s newest book, 9 Traits of a Life-Giving Marriage, grew out of their heart to help couples grow closer to God and to each other. In their pastoral ministry to marriages, Wayne and Sue have seen how sharing their own struggles can help create a safe context for couples to be transparent and honest with their own issues. They have been helping couples find freedom and transformation through conferences, marriage retreats, seminars, and coaching through out their entire marriage. Known for their transparency and honesty, Wayne and Sue have helped hundreds of couples find freedom and transformation in their own marriages.

To invite Sue (or Wayne & Sue) to speak at your event click here.

The nationally syndicated Healing Rain Radio Broadcast was launched to provide daily encouragement to listeners. When Sue arrived in the Dallas Metroplex, Sue was already being heard on popular Dallas Radio Station KCBI. Often when people hear her voice or name they realize that she has already been a daily inspiration to them via the airwaves. 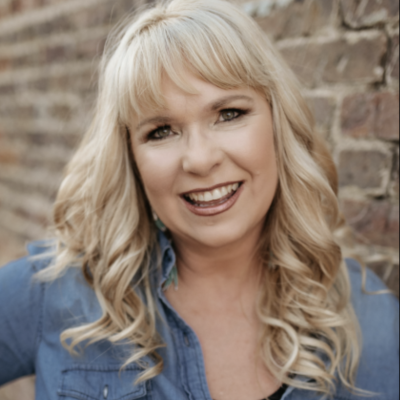 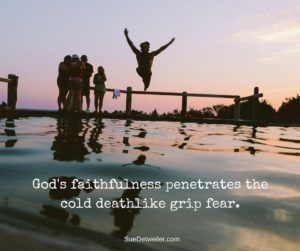 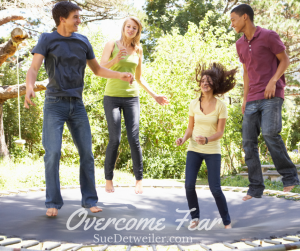 Overcome Your Fear with Faith #FearlessFaith

Commit Your Ways to the Lord

7 thoughts on “Launching Out Into the Deep” 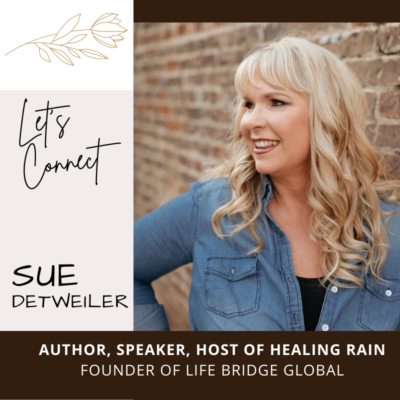 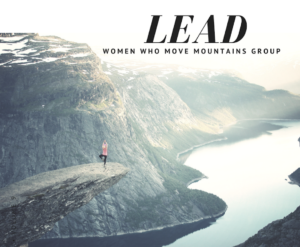 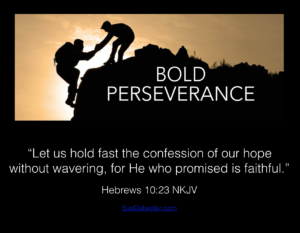